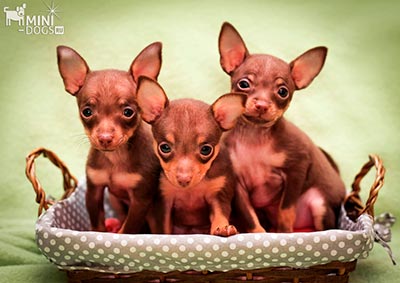 Welcome to the page devoted to the unique breed of the very small, charming dogs called the Russian toy terriers! Our club, Mini-Dogs.Ru joins breeders in Moscow, Russia who over the years have been devoted to this breed of amazing, cute pets. We have worked diligently to breed really tiny, smooth-haired terriers of great quality that meet the FCI standards (Federation Cynologique Internationale). In our own kennel we also feature Chihuahuas, and although we cherish and love both breeds, without a doubt we can say that toy terriers are our true favorites and remain close to our hearts!

Origin of the unique breed of tiny terriers

Let me begin by saying that this breed is gaining in popularity here in Russia and abroad. I would like to share with you the history and origins of this specific breed of terriers.

The background of the Russian toy terrier goes way back to Jolly Old England where in medieval times a special breed of small, black-coated hunting dogs were first named terriers. In the beginning, English terriers were highly valued for their ability to hunt and kill rats and the most highly prized of this breed originated from the city of Manchester. At that time, in the 17th century, rat-killing contests were staged between terriers. After this form of entertainment had been banned, the breed acquired the status of a superb companion dog. Only many years later, these dogs were officially placed in the category of a separate breed named the toy terrier. This was due in part to their dainty look and ease of ownership. This breed captivated the hearts of all of Europe and at the end of the 19th century appeared in Russia. In contrast to the English breeders who wanted to breed more sturdy dogs, in Russia the small, delicate terriers are in greater demand and more highly valued. So now you know the origins of this special line of terriers that was later called the Russian toy.

Different names of the breed and FCI specification

There are many different breed names for these toy dogs that people use nowadays. That occurred because of the long history of the breed and the fact that the breed changed names several times over the years. In addition, people use special cute names to express their love for these tiny dogs in their everyday lives.

In the time of the Soviet Union in the second half of the 20th century, the Russian smooth-haired and the Moscow long-haired toy terriers were very popular. The number of participants in pet shows has also grown in number every year. In other words, breeders of the toy terrier pursued the establishment of excellent bloodlines during this period of time. But at the beginning of "Perestroika" (the time of changes in the mid-80s led by Gorbachev) in a satellite state of the former USSR, a huge influx of the toy terrier began. I want to emphasize the fact that this movement started with the importing of this specialized breed of dogs and other fashion trends from the West that previously were not seen in the country. This movement had a negative influence on the later development of this terrier breed. From the mid-90s these tiny dogs drew the attention of people back to this breed and in 1996 the National Toy Terrier Club was founded. Then in 2000 a standard of the breed was adopted that included the smooth-haired and long-haired lines under the common name of the Russian toy terrier. The National Toy Terrier Club was instrumental in aligning the standards of this breed to the International Canine Federation. Due to these efforts, in 2003 the standard was coordinated with the FCI and then was recognized by the various international canine organizations. At that time, the toy terriers belonged to a third group recognized by the FCI and finally in 2006 the historical moment occurred when the breed was acknowledged by the International Canine Committee. But due to regulations of the FCI, the word "terrier" was dropped and dogs of this breed were placed into Group 9 toy breeds according to the classification of the FCI. So in the present time an official name of this breed is "Russian Toy Dog".

In everyday life, at home, or among our friends and relatives, there are popular and endearing names of the dogs of this breed and you might often hear "moi lasckovyi toychik" ( in English: my sweet tiny toy, toychik - for a male), or "moya ozornaya toechka (in English: my mischievous tiny toy, toechka---referring to a female). 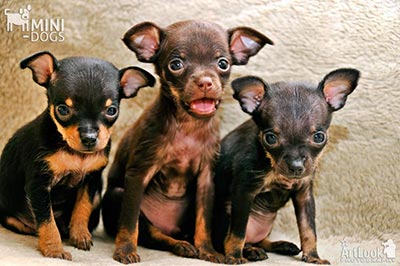 Russian toy terriers are very gentle and graceful small dogs that look similar to miniature deer or fawns with their brittle, delicate legs, short docked tails, swan neck, and refined small head. They have very expressive eyes and large stand-up ears. No one can remain indifferent to these cute dogs. In most cases they awake in people kind and warm feelings, impressing them by their unique small size, energy, and charm.

The dogs of this breed are distinguised by their inherently calm personality. Their height (in withers) can vary from 8 to 10 inches (19-29 cm.) with a weight anywhere from 3 to 6 pounds (1-2.5 kg.) One of the special features of these mini-dogs is that they are ideal companions and relate well to humans. These dogs will give you maximum joy with minimum problems! This is also a slogan of the Mini-dogs.Ru club. You might ask if toy terriers have any odor as other dog breeds can be known to have. The short and definite answer is "no." Yet in reality they might have a nice smell due to the perfume of their owners who like to carry the toy dogs in their hands.

Russian toy terriers are very special dogs. In spite of their pocket size, they have good health and possess excellent character. They are not predisposed to diseases such as cancer or other disorders of the liver, gastrointestinal tract, prostate or neoplasm. The care of the smooth-haired toy terrier is very easy and practical. Because of their short coat they do not require grooming. Another benefit is that they are hypo-allergenic due to their minimal grooming needs.

The tiny size of these toy dogs evokes feelings of protectiveness and nurturing for this delicate creature. And what emotion can be better in life? In return for your care, the dog will unselflessly show his adoring love to you. This devoted, small friend will be ready with a moment's notice to protect you (in spite of his size), follow you all around, meet you in the evening when you return from a long and hard day at work and instantly rejuvenate you. As this tiny dog gazes into your eyes, you can feel all the stress of the day dissipating with just the loving eyes of this dog. If you are going to bring a dog into your home, here are just a few of the benefits of this real wonder breed of Russian toy terriers:

Information about our puppies can be obtained after contacting us by phone at: +7 495 946 0440 (home) or +7 910 470 7811 (Arthur and Olga Lookyanovy) Bookmark and follow the page with our advertisements. Soon we will be posting new photos of the toy terriers for sale! 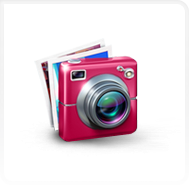